Since its founding in the tumultuous times of 19th-century Japan, Keio University has continued to provide the intellectual leadership to tackle the issues facing Japanese society in its quest for development, transformation, and modernization. As we face the challenges of the post-industrial era of the 21st century, Keio continues to uphold the pioneer spirit of its founder in his pursuit of peace, prosperity, and progress.

The true meaning of this phrase is that the work you accomplish will become the foundation and those who carry on your work will exceed you; it is a word that epitomizes courage by accepting the fact that you will one day become a part of the past, a part of antiquity.

With an extensive worldwide network and some of the best academic and research opportunities in the country, Keio University is where the world’s next generation of global leaders come to grow. 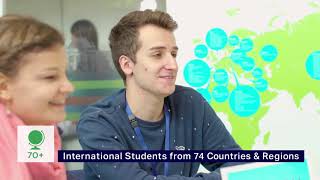 Faculty of Policy Management / Faculty of Environment and Information Studies

Get an insider's look into life at Keio and hear what students have to say.