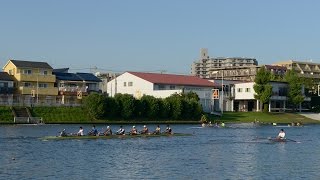 Though competitive rowing may not be particularly popular in Japan, it is a major sport in Europe and the United States. There are various disciplines within the sport, including single sculls (single rower), coxless fours (four rowers) and coxed eights (eight rowers, plus a cox). Boats can reach speeds of up to 20 kilometers per hour, and in races over distances of 1,000 or 2,000 meters, a tenth of a second can make all the difference.

Keio Rowing Club was established in 1889. In 1905, the club started competing against Waseda University in the Waseda-Keio Regatta, an annual spring contest held on the Sumida River. A popular and historic event, this regatta has regularly attracted more than 30,000 spectators in the 85 meets held to date. Currently Keio Rowing Club boasts around 80 members. Last fall the Keio Times sat down with the two team captains and vice captain to reveal how they balance athletics with academics and to get an inside look into the traditions of one of Keio’s oldest clubs.

*All information current as of September 2015

—Please tell us about Keio Rowing Club and how you first became involved in the sport.

Wataru Yoshida： I’ve been rowing for about seven years now, after initially wetting the oars in high school. Many university rowing clubs are full of experienced athletes, but Keio Rowing Club is more diverse, incorporating everyone from novices to national champions. A total beginner can start rowing here and still expect to be among the best in the country by the end of their college career. The club’s 80-or-so members all hail from different backgrounds and row for different reasons, so it can be difficult to take the club in any one direction. The one thing we all do share is the goal to be the best in Japan, and senior club members mentor other club members as we train towards this goal.

To be perfectly honest, it’s really tough juggling my studies and rowing commitments [laughs]. For about 300 days each year, I live with fellow rowers and train extensively most days, though I’m conscious of the need to take quality rest days, too. Living together with so many outgoing members has also heightened my appreciation of friendship; the bonds that tie us club members together are really strong. Of course, on our free days we focus on our studies, but we also hang out together and have fun. Rowing is the ultimate team sport, and I’m sure I’ll treasure the memories of the club for the rest of my life.

—Can you quickly sum up the qualities of Keio University and Keio Rowing Club?

Well, I’d say the friendships forged within the rowing club are akin to family ties. As for Keio University itself, it has a reputation for attracting students who were born with a silver spoon in their mouth, but actually, since joining Keio, my impression is that it’s actually full of hard-working people who want to get the most out of life. If given the chance to do it all over, I’d still choose Keio.

A spirit backed by 127 years of tradition

—Could you tell us how you came to join the club and talk a little about your training regime?

Atsushi Birukawa：My interest in rowing started at my high school in Akita Prefecture. There’s a river in the city where I went to school, and rowing was popular, and well, the rest is history. Initially, I’d thought rowing was merely about simple, repeated actions—not that complicated, you know. However, once I got seriously involved in the sport, I realized that there’s a lot more to it than meets the eye, and I came to recognize that there are many nuanced difficulties lurking within those seemingly straightforward actions. There are quite a lot of people in the club who’ve come from other sports, and because rowing is very different from most other sports, some members initially struggle to retain their balance when they get into the boat, and they consequently end up going for an unexpected swim. Extending the knees and generating knee power are important elements in rowing, so daily training is imperative to properly discipline the lower half of the body. Our team doesn’t emphasize weight training or other routines to build muscle. Instead, our policy is to strengthen our bodies through movements inherent in rowing, so we focus mainly on rowing practice, workouts, and running as supplementary regimens.

—What characteristics do you think really define Keio Rowing Club?

Former club members come to cheer us on at meets, provide us with refreshments, and frequently visit our training camp; this kind of regular association gives current members a real feeling for the history of the club. But it’s not just about tradition or pressure. Rather, it’s a kind of spirit or attitude that you instinctively feel has been passed down from generation to generation. As an organization within the Keio University Athletic Association, the club has persistently focused on winning—this approach hasn’t changed at all over the last century or so. With so many diverse members in the rowing club, it’s a daunting challenge to unite them as teammates in the pursuit to become the best in Japan, yet these difficulties make our goal all the more rewarding. We’re together every day from dawn till dusk, so I get the feeling I’m going to miss them all after graduation [laughs].

—What’s the allure of Keio University and Keio Rowing Club?

Before I started at Keio, I’d harbored a vague notion that it was an educational institution for children from wealthy families. But once enrolled, I discovered that each and every student is totally devoted to doing something they love. When Keio students work together, we’re able to share something special in pursuit of a common goal. For me, it’s all about the rowing. Each individual has his or her own quirks and dreams, which ultimately has nothing to do with the university. Having said that, I think that Keio is defined by the lifelong ties we’re able to form, and I’d like to still stay in touch with my fellow rowers when we’re in our 70s and 80s—that’s the kind of thing that makes Keio Rowing Club special. Looking ahead, I think supporting the club after graduation will be my way of contributing to Keio University as a whole.

Growing together,
connecting with the people around you

—Please tell us about your daily life and how you came to join the rowing club.

Nodoka Furukawa：I was introduced to rowing in my first year at university, but I was a late starter even then, as I didn’t join the club until July. It was a coincidence, really. I’d gone along to check out the club because of a casual invitation, but I was immediately fascinated and signed up straightaway—now, you can’t keep me off the water [laughs]. Morning training starts at 4:30 a.m. I’m a student in the Faculty of Science and Technology, so I regularly make the trip between the Yagami Campus and our training camp and dormitory in Toda. I have regular classes and try to use my free time to study and do homework. Surprisingly, I’m able to balance my studies and rowing pretty well. Though studying and training hard are both high up on the list of priorities, I think it’s important to relax, too. So on days off, I like to meet up with friends and go out to eat, or perhaps just take it easy around the house.

—How did your impressions change after actually joining the club?

When I visited the club to see what it was like, I didn’t think it would be that difficult to row. But when I actually tried it, it was tricky! I realized then that watching someone else do something and doing it myself are totally different things [laughs]. There are only a couple of girls from each year, so the club is mostly guys, but for routine practice everyone trains together. Sure, there are differences in physical strength in relation to gender, but the harder I work the more recognition I get for my efforts, which motivates me even more.

Many students who join Keio Rowing Club have never tried the sport before. Compared to other universities, we concentrate more on boat-based practice and less on physical training. As there aren’t that many girls in the club, we strike up friendships with female rowers from other universities—in particular Waseda University, which has a training facility next to ours. I’ve had some great times with fellow club members, and my experiences rowing have enriched my four years at Keio. Rowing’s a team sport, and I’m sure the experiences I’ve gained at the club will help me deal with life when I go out into the world.

—What is the allure of Keio University and Keio Rowing Club?

If I had to sum up the charms of Keio University and the rowing club in a single word, it would be “independent.” Many students shine while striving toward their respective goals. There aren’t any hierarchical relationships among students of different years, so it’s easy to speak up, which creates a really open atmosphere. This kind of atmosphere encourages the strongly independent and unique personalities you find in Keio students. The connections I’ve made with my teammates−regardless of their age−are something I’ll treasure my whole life.